Login to see your courses

Login to see your courses

The fallacy of “getting on the gas early”

A lot of this information here comes from the book “The Perfect Corner” by https://www.paradigmshiftracing.com/.

Imagine a tight 180 degree turn followed by a long straightaway. We have been taught that in such a scenario, a late apex is critical, because even though it results in a lower minimum speed in the corner (compared to taking a larger constant radius geometric arc), it allows us to get on the gas sooner, giving us a higher exit speed, and we carry that higher speed advantage all the way down the straightaway.

Let’s work through an example with the aforementioned 180 degree corner.

If we drove the largest perfectly circular arc possible through this corner, we would apex at the geometric center. By virtue of being the largest circle that fits, this line would give us the highest minimum speed through the corner. However, it also means we would be unable to accelerate at all until the very end of the corner. The laws of physics simply wouldn’t allow it. If we are driving at the absolute limit on what is already the largest possible arc, then if we start accelerating at any point before the end of the corner, our arc will get bigger, and we will run off the track. 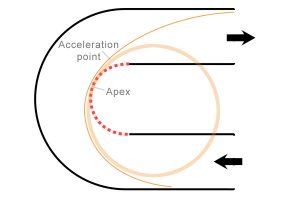 So far so good. We may have a lower speed in the earlier part of the corner, but can now accelerate out much sooner! But how do we know if we have optimized our exit? How late our apex should be? How early should we be accelerating out of the corner?

There is a common saying in the racing world that you shouldn’t get on the throttle until you are sure you won’t have to lift. While that is true, the real answer is even simpler than that. The ideal acceleration point, every single time, is at the apex. On every standalone corner (i.e. not linked corners) on every track in the entire world, the correct acceleration point is always at the apex. Not before, not after. At the apex. Furthermore, we can judge the precision of our apex by whether we were able to accelerate out of the corner effectively from that point. If our ideal acceleration arc from the apex does not allow us to just barely stay on track at corner exit, it simply means we made a mistake and need to adjust our apex.

In our example above, apexing a little after the geometric center allowed us to accelerate out of the corner sooner than we were previously able to, but it was still after our new apex. This tells us that we need to move our apex even later, to move our acceleration point earlier to match.

KEY LEARNING: Another way to look at the apex is that it is the point on the inside of the corner that limits our ability to go faster through that corner. While the apex is usually a point on the inside curbing of a track, or a cone on an autocross course, it can be anything! It could be the edge of a puddle when racing in the rain. It could be a severe bump. No matter what, our deceleration and acceleration revolves around that one point.

Why not get on the gas even earlier?

We saw that by moving our apex later, we were able to accelerate out of the corner sooner. So why not make the apex even later so we can start accelerating before the apex? There are several websites, images, books, and even racing schools that advocate this idea.

Certainly, we could utilize such a late apex that our speed at the apex and onto the straightaway is even higher. But it will result in a greater elapsed time for the corner as well as for the entire lap. The reason for this is actually very simple. Recall, our goal is to get on the throttle as soon as possible, but the key is that it should be based on time, not position. From the point that we hit the brakes to enter the corner, we want to minimize the time before we are able to accelerate. It turns out that the fastest way to accomplish this puts our acceleration point at the apex. 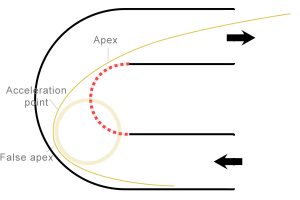 With driving a super-late apex line in an attempt to accelerate before the apex, we are mistakenly thinking in terms of position instead of time. Because the super-late apex line will, by definition go “deeper” into the corner, as well as have a tighter radius, it is going to take longer to get to the minimum speed for the corner, not to mention also require driving a longer distance to get around the “false apex” we have created for ourselves. So while we are able to get on the gas before the real apex in terms of position, we will be getting on the gas later in terms of time, while also doing so from a lower speed.

What if we have an infinitely long straightaway after the corner?

We have been told a thousand times that if we carry 1 mph more onto the straightaway, we will carry that advantage over the entire length of the straightaway. So if we have a really long straightaway after the corner, eventually the super-late apex line will catch up and pass the “correct” line, right?

Sadly, no, it will never catch up. Again, we must remember to make comparisons based on time and not on position on the track. Let’s contrive an example to illustrate this:

Imagine one car on the correct apex line, and another identical car on the super-late apex line. Let’s say they both come hurtling towards the 180 degree turn at 150 mph. The 2 cars will likely have to brake at the same point because even though the car on the correct apex line will be turning in sooner, the super late apex car has to slow down more for the tighter turn it is making. Still, let’s give the super-late car the benefit of the doubt and say that maybe it was able to brake just a hair later. So it will gain a tiny bit of time during the initial braking phase. However, once the car on the correct line turns in, it is driving a significantly shorter distance, and doing so at a higher speed, while the super-late car is still slowing down more to make the tighter turn deeper into the corner.

Don’t just take my word for it. Review in-car videos of Formula 1 drivers going around turn 11 before the long straightaway at the Circuit of the Americas. Even with such a long straightaway, Lewis Hamilton and Sebastian Vettel set their apex such that they begin to accelerate exactly at the apex.

Hence, the fallacy of getting on the gas early

For any particular combination of car, corner, and conditions, it is important to understand that there is no such thing as a “late apex” or “early apex”; there is only a correct apex.

While there are certain situations (final corner before beginning a qualifying lap, or when trying to make a pass, etc) where an apex that is earlier/later than optimal can be useful, from the perspective of getting the fastest possible lap time, there is only one correct apex in each corner for a given car.

This site uses Akismet to reduce spam. Learn how your comment data is processed.

The Complete Track Driver's Manual
The most comprehensive system for understanding all of the nuances of driving on track and improving your performance, no matter your current skill level.