Why “steering feel” is not as important as you think

In the pursuit of lowering our lap times, our primary task is to keep the vehicle as close to the edge of grip as possible, on the optimal line. In order to do this effectively, we have many sensory inputs at our disposal (steering feel, seat of the pants g-forces, visuals, sound, etc), and while they are all useful to varying degrees, some of them may not be giving us as much valuable information as we think.

Unfortunately the most commonly relied upon sensory inputs aren’t necessarily chosen for how accurate they are, but for how easy they are to pick up on. A lot of us focus on things like tire noise and steering wheel forces because they are easy concepts to understand, and although they can give pretty good information in a few circumstances, as we will discuss here, they are imprecise, and thus not inputs we need to particularly rely on.

Our cars provide us with many different sensory inputs, which we try to assimilate and combine as best we can. But what happens when we get conflicting information from different sensory inputs? For example, maybe a driver is accustomed to turning the wheel until the tires start squealing, but realizes that the car will sometimes turn even more once the tires are making some noise. How does the driver know which input to pay attention to?

Different sensory inputs have different levels of precision. While most sensory inputs can get us pretty close to the limit, very few can provide us with the precise information needed to tell us exactly what the car is doing. Let’s call the more precise sensory inputs “primary cues”, and the less precise ones “secondary cues”. Secondary cues can be useful as we improve our recognition of the primary cues, but they eventually become less important as our skills improve.

Everyone starts with tire noises

It’s easy to see why most beginning track drivers focus on tires noise as their primary sensory input. With most street tires, the squealing noise we hear is the sound of the rubber vibrating rapidly. When using street tires in the dry, if we aren’t hearing any noise, we are most likely well under the limit. Racing slicks, on the other hand, usually only start making sound when we are past the limit. So while some tires start making noise as we approach the limit and other only make noise once we are well past the limit, there is no particular noise a tire makes right at the peak of grip. Try this out yourself! Drive in a steady circle on whatever tires you like, and you will notice that (depending on the tire) there is probably a 2-3mph range around the speed at which you feel peak grip, where the sound is virtually identical. Tire noise alone can get us in the range, but ultimately is an imprecise sensory input for finding the limit, and is thus a secondary cue.

The myth of steering feel

Along with tire noises, steering forces are amongst the early sensory inputs we tend to focus on. “Steering feel” has reached almost mythical status in car culture, but while being able to feel every bump might feel good from a subjective standpoint, as we’ll see here, it isn’t particularly useful for finding maximum grip. “Steering feel” is simply our sensation of forces being transmitted through the steering wheel, so let’s break down where those forces are coming from.

There are 2 components to the forces we feel from the steering wheel:

1. Trail forces because of caster
Most (every?) car has some amount of positive caster in the front suspension. The forces felt through the steering wheel are directly related to the center of force at the contact patch, and how far this is from where the steering axis (the line through the upper and lower ball joints) intersects with the ground. When viewed from the side, the distance between the two is called trail. The longer this trail distance, the more force you will feel on the steering wheel because it acts as a longer lever. This is why increasing caster, which makes the trail longer, makes the steering heavier. 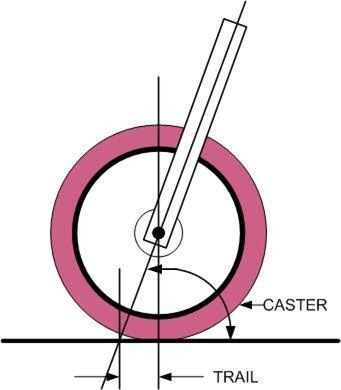 However, because a tire flexes and twists and slides during acceleration, braking, and cornering, the amount of pneumatic trail changes, and either adds or subtracts from the total trail. Turns out, that as a tire approaches and goes past the limit, the center of force moves forward towards the front of the contact patch, which makes the trail shorter, thus reducing the force on the steering wheel. Of course, this varies from one tire to another, but this is why we sometimes feel a drop in steering forces before we reach the lateral limit of the tire. Trouble is, there is no way to know where in this lower steering force region the exact peak of grip actually is.

The most significant problem though, is that it is impossible to separate this drop off effect from the much greater effect on steering forces that weight transfer and track surface features will have on the contact patch. The drop off effect is more usable in “ideal” circumstances such as on a silky smooth skidpad where we are purely dealing with cornering forces. However, on a real track, during corner entry for example, as weight is progressively transferring to the outside front tire, we will have changes in tire loads that will have a direct effect on steering forces, and there is no way for us to know if this is from a change in pneumatic trail or from the change in load. This is before taking into account the changes in load from bumps and track imperfections.

2. Scrub radius forces
Similarly to trail, but working in a sideways direction, we have steering forces caused by scrub radius, which is the distance from the steering axis to the center of the contact patch if you are looking at it from the front. While the trail tells us about lateral forces, the scrub radius will tell us about longitudinal forces. 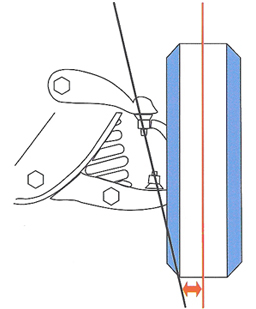 These two forces are the entirety of what makes up “steering feel”. And as we have seen, these forces may get us in the vicinity of the limit, but are ultimately insufficient for finding and staying at the edge.

I am not suggesting that steering feel or tire noises or any other secondary cue is completely useless. But they are, at the end of the day, limited in what they can do for us. In the sim racing world, it is not uncommon for the top sim racers to be equally as fast when they have force feedback enabled or disabled. Without the steering feel, and even lacking the g-forces felt in a real car, how are sim racers able to perform so well not just in the virtual environment, but also in the real world? It is because they are forced to really develop their vision, which is one of the most important primary cues. The importance of vision as a primary cue should come as no surprise, given that so much of driver training revolves around improving a driver’s vision around a track.

Closing thoughts from the world of karting

I know, it sounds borderline blasphemous to suggest that steering feel is not as important as we might have thought, especially in light of how much car manufacturers and automotive pundits revere a car with great steering feel. As a real world example of how steering forces are not a primary cue for finding maximum grip, consider racing a go-kart. Because of their design, they have huge amounts of caster and a large scrub radius along with a very quick steering ratio. As a result, kart racers must deal with a very heavy and quick steering, and virtually no steering force drop-off as a tire approaches the limit. Even with these limitations, great kart racers are still able to drive at the limit and find the maximum grip available. If this information doesn’t come from the steering wheel, how do they do this?

Through experience, kart racers learn to sense the limit with much more precise visual and g-force based sensory inputs, and is a big part of why people who grew up kart racing do so well when they transition to cars. They don’t rely as much on tire noise, steering feel, and other secondary cues. They are much more tuned into the far more precise primary cues, such as g-forces, yaw sensitivity, visuals, and acceleration sensitivity. If we want to find that next level of pace and become more consistent with our performance, it would serve us well to focus much more on the sensory inputs that offer us the information we actually need, rather than the ones that feel good.

We will dive more into the primary sensory inputs in a future post.

Share this article:
2017-09-29
Previous Post: How to make the best of it when your car is handling badly
Next Post: Explained: Weight transfer vs body roll (part 1)

This site uses Akismet to reduce spam. Learn how your comment data is processed.

The Complete Autocrosser's Manual
The most comprehensive system for understanding all of the nuances of autocross and improving your performance, no matter your current skill level.